Diane Morgan‘s Roots: The Definitive Compendium with more than 225 Recipes (Chronicle 2012) is a comprehensive, but not exhaustive, cookbook and guide to roots, tubers, rhizomes, and corms. . It is a welcome book to explore as the weather gets cold and there are fewer and fewer aboveground vegetables to be found in markets.

Diane starts with defining what she is covering:

This book’s focus is roots, or vegetables that have fleshy edible underground parts that originate from roots, stems, or leaf bases. In general, they are storage organs enlarged to hold energy in the form of carbohydrates. (p. 16) 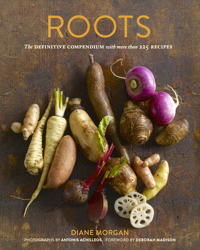 It is organized alphabetically, starting with Andean Tubers and finishing with Yuca and then Other Roots. The chapters include a handsome photograph of the root in its uncooked form by Antonis Achilleos, that, in the case of Andean Tubers, would benefit from labels – which are ullucos and which are potatoes? Each chapter goes over the history and lore, varieties, nutrition, availability, selection, storage, and basic preparation. She then adds various recipes that feature that root.

Crosne are the brown caterpillar-like roots which Diane compares to tiny Michelin men. Who knew this most French of miniature roots was really a member of the mint family native to Northern China? The recipes include Pickled Crosnes (p. 109) that wind up in Dr. Gibson Meets Mr. Crosne cocktails (p. 114). A nod to their Chinese origin, try Spicy Ginger Pork with Crosnes in Bean Sauce (p. 113) or the more the more French sounding Crosnes with Truffled Cream (p. 111) perfect for a Christmas feast.

Think potatoes were the only root crop to come out of the Americas? Then try Malanga or America Taro, a corms (starch-bearing root) of a subtropical plant native to the Americas. It is used much like the potato, but also in sweet dishes. Instead of Latkes, you could make Malanga Fritters with Serrano Chiles and Garlic (p. 198) or the traditional Alcapurrias (pp. 200-1) or fritters stuffed with meat. She also features several desserts, including Cuban Malanga Pie:

The shredded malanga rises to the top of this cinnamony rich custard as it bakes, sculpturing the surface with thin, lacy threads. It looks beautiful, and has become a new favorite. (p. 204)

Bored of potatoes, yams, and the like? Get Roots, and explore the rest of the world down under.