El-Haddad and Schmitt: The Gaza Kitchen

If the Gaza Strip were practically anywhere else, it would be an insignificant piece of land – perhaps without a name and certainly without its own culinary institutions. But this tiniest sliver of land, lodge between Israel and Egypt, has great significance – and because it is isolated – it has a culinary culture worthy of a slim, impressive book. In The Gaza Kitchen: A Palestinian Culinary Journey (Just World Books 2013) Laila El-Haddad and Maggie Schmitt chronicle recipes, stories, and profiles of the people who inhabit and struggle in this war-torn land. 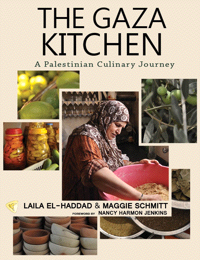 But why should readers be interested in a Gaza cookbook?

Nearly everyone in Gaza to whom we explained the project understood it immediately: to talk about food and cooking is to talk about the dignity of daily life, about history and heritage in a place where these very things have often been disparaged or actively erased. (p. 7)

The Middle East has plenty of intense spice blends, like the oregano mixture za’atar, but this book also includes two recipes for Dugga, a blend of pulses, spices and herbs (p. 21). The Bedoin version comes from Um Hana, who is profiled. She lives in Beit Lahiya with her husband’s second wife and all their daughters, pigeons, rabbits, and doves. Where Um Hana is full of enthusiasm for her cooking, Um Ibrahim, 89, only looks back to a time before 1948 when her family lived in their home village. Another woman, Addoula, who lives in a house surrounded by a wall that encloses a tidy garden, cooks Fogaiyya (p. 65) a chard and chickpea spread. She makes this for the authors as they watch her cook three different dishes, and eat ripe figs from her tree – it’s the picture of figs that will make your mouth water.

The Gaza Kitchen is full of fascinating reporting of the lives of Gazans, their daily rituals, how they deal with deprivation, attacks, as well as how they thrive in their tiny corner of the Middle East.