Bobby Deen: From Mama’s Table to Mine

Image problem? Turn it into a better image.

Bobby Deen, one of the perpetually grinning sons of Paula Deen, turned his mother’s diabetes announcement fiasco into a TV show and now a book. From Mama’s Table to Mine: Everybody’s Favorite Comfort Foods at 350 Calories or Less (Ballantine 2013). With Melissa Clark as his writing partner, he turns gosh darn Southern charm on his mother’s butter-laden cooking. On the cover and throughout the book are pictures of Bobby looking quite svelte. If you are a fan of Paula’s comfort food, but want to eat it more often, Bobby’s tweaks take out some of the fat and calories. 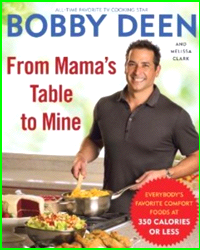 From the appetizer section, try Hush Puppies (p. 13). These are not the typical greasy balls of cornmeal that you might get at a country fair, but baked cornbread balls. They’ll set you back 93 calories compared to the 277 calories for Paula’s version. Each recipe comes with calories and fat – before (Paula’s version) and after (Bobby’s version). The Easy Ginger Glazed Spareribs start with Chinese style-pork spareribs slathered with molasses and ketchup. Still, the results cut down fat from 43g to 28g. The Low Country Boil (p. 96) rich with shrimp and potatoes, cuts down on fat by replacing the pork sausage with chicken sausage. Want more shrimp? There’s Charlestown Shrimp and Grits with Canadian bacon over quick cooking grits uses fat free half and half to cut down on fat calories.

Like Paula, Bobby often uses ready-made ingredients for short cuts. That’s especially the case in the desserts section. Paula Deen is known for deep fried, artery clogging desserts. Gooey Less Butter Cake uses a yellow cake mix, and 1% buttermilk to bring down the fat from 15g to 6g. Bobby’s Not My Mama’s Banana Pudding (p. 165) uses fat free whipped topping, and 1% milk to cut down on the calories and fat. The Doughnut Bread Pudding (p. 175) starts with store bough doughnuts, adding fat free half-and-half and less sugar than the original. He also includes It IS My Mama’s Peach Cake (p. 180) that Bobby claims he didn’t have to substitute much – it does have fat free whipped topping, and fat free yogurt that somehow don’t fit with Paula’s brand of cooking – but who knows?

There are helpful daily menus at less than 1,500 calories along with healthy living tips at the back of the book. If you like Paula’s cooking, but don’t want to end up as another statistic in the obesity epidemic, then From Mama’s Table to Mine is a very helpful book.