You may be curious about what our ancestors ate, but it is not always easy to use old cookbooks. They don’t often include measurements or enough instruction, since home cooks of the time would have known what to do. Scheherazade’s Feasts: Foods of the Medieval Arab World(U. of Penn Press) by Habeeb Salloum and daughters Muna Salloom and Leila Salloum Elias goes a long way in bridging the centuries. The over 120 recipes are from ancient cookbooks – updated with modern proportions. The scholarship does not overwhelm the palate – learn but enjoy the food.

The introduction covers the most influential Arab cookbooks from the 13th century onwards:

We have attempted here to recreate their medieval dishes for the modern cook, reviving as best we can those dishes prepared by the Arabs of history that seem most likely to please the contemporary palate. Each recipe is given first in a close translation of its original source, and next in our modernized version. To prepare and taste these foods is to enter the world of a magnificent and cosmopolitan past, where far-flung cultures met in the kitchens and on the dining tables of the affluent, be they caliphs, kings, princes, or nobles, intellectuals, or merchants (p. 14)

That is a past alive to Arabs in the Middle East today. Western kitchens are at times magnificent and cosmopolitan, and far-flung cultures do, in fact, meet in our food. 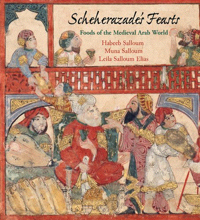 The appetizers start with a familiar sounding Green Olive Spread (p. 15) that is far from its modern day iteration. This dish is one layered flavor over another: green olive, walnuts, tahini, lemon, parsley, mint, rue, and more. More unusual is Fried Eggs with Vinegar and Spices (p. 18) that includes cinnamon, mastic, caraway seeds and white vinegar. If you are trying to eat more green leafy vegetables try Spicy Chard wit Fava Bean Dip (pp. 20-1). The modern version omits the spikenard and mustard foam, but includes red miso, coriander seeds, rue, and walnuts. From the recipe notes:

Bawarid (plural of Baridab) literally “cold things,” were made with various meats, poultry, and fish and with different vegetables. There were even Bawarid designated as special dishes for Christians during Lent (al-Warraq 119-20) A combination would be served, followed by hot entrees, much like todays mazzah of Lebanon and Syria. (p. 21)

Mezze traditions are the same in Turkey and Greece. Medieval cooks often served sweetened dishes, whether carrots, Honeyed Carrots in Rosewater (p. 27) or Cold Roasted Chicken with Almonds and Pomegranate Seeds (pp. 32-3) in which a roasted chicken is sprinkled with ground almonds, sugar and pomegranate seeds.

Scheherazade’s Feasts is a wonderful book to read, add to the curriculum of a class on the Middle Ages, or simply to cook from. There is plenty to explore from seafood to lamb and a whole section of vegetarian dishes. At the back of the book is a chapter with menus (pp. 181-87), including ones for Lent, Passover, and Christmas. Scheherazade’s Feasts would make a great gift to anyone embracing all three faiths.