Jennifer McLagan‘s Bitter: A Taste of the World’s Most Dangerous Flavor, with Recipes (Ten Speed 2014) is like venturing into the night exhibit at a culinary zoo – even the photographs by Aya Brackett of chicory, cardoon, bitter oranges, and radicchio are on a black background. As good as the photographs are for evoking the daring flavor of bitter, it is Jennifer’s text and recipes that make this book an essential addition to your cookbook collection – where her previous books: Fat, Bones, and Odd Bits, ought to be.

Bitter is both an intellectual and a culinary journey:

First I would have to define “bitter.” I thought that would be easy until I actual tried to do it. When I discussed the taste of bitter with others, I realized that what I think of as bitter is not necessarily bitter for other people. Some even argue that grapefruit, which were the spark for this book, aren’t even bitter: they’re simply sour. (p. 3) 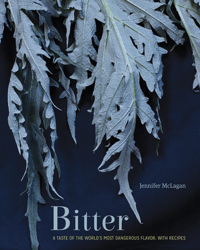 She means the white, old fashioned kind of grapefruit that needs a sprinkling of sugar or honey to balance out the taste – and not the pink or ruby kind that have displaced them. Understanding bitter, it turns out, is about the science of taste and the other senses, as well as how bitter amplifies and competes flavor. “The complexity of bitter-and the individual variation we bring to experiencing it-makes any exploration of the subject subjective (p. 5)” Subjectivity makes for a good cookbook.

There are chapters on bitter greens with recipes like Sugarloaf Chicory Sautéed in Duck Fat (p. 54) – a good reason to eat duck – Dandelion Potato Rosti (pp. 44-5) and Bitter Greens Ravioli (pp. 47-8), which might go well with that duck. She includes a History of Basic Tastes (pp. 42-3) – from Aristotle’s seven tastes to the final whittling down to a pathetic four courtesy of German Doctor Adolf Fick. What is most interesting is that bitterness is not a single taste, but many:

To illustrate she follows this with a chapter on Subtly Bitter, with recipes for Seville oranges like Seville Orange Whiskey Marmalade (p. 151) and recipes that feature the bitterness of olive oil like Olive Oil and Orange Pound Cake (p. 158).

There is much to explore and consider in Bitter. Jennifer brings together recipes from Iran, France, Italy and Japan to highlight how bitter is and should be part of most meals. Pair Bitter with a fine dark chocolate or a selection of great ales and beers, and you’ll have yourself a perfect gift.