Penny De Los Santos‘ photo spread in the beginning of Aglaia Kremezi‘s Mediterranean Vegetarian Feasts (Abrams 2014 of purple artichokes, young zucchini with their yellow flowers, carrots, Swiss chard and fronds of fennel should remind us why vegetables can be so satisfying that the lack of meat is forgotten:

Vegetables are more photogenic, colorful, and sexy, so obviously they were the “Lolitas” of the camera lens. And yet, if I had prepared meat more often over the years, I would certainly have more than a dozen pictures to show for it. 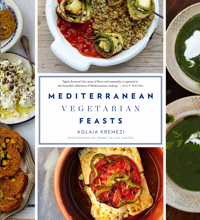 Like so many Mediterranean cooks, Aglaia isn’t a vegetarian, but vegetables dominate her cooking, as they do the healthy cooking of Greece and the rest of the Mediterranean. She points out in her introduction that though the variety of vegetables may be limited, there are so many different ways to cook them and flavor them, that they are never boring. The point is learning that the same zucchini can make such different dishes when it is combined with stuffing, fried, sauced, or baked.

The first section on Basic Preparations & Techniques guides you through how to treat each vegetable – what can be frozen, what needs soaking, what should be cooked immediately. The recipes range around the Mediterranean from France to North Africa and the Middle East and she includes helpful headnotes that trace the recipe’s origin and even the linguistic history. For example, Lebanese Kishk and Ksinohondros (pp. 30-1) from Crete, also called Trahana in Greece and Tarhana in Turkey, is a kind of bulgur wheat mixed with milk and yogurt, in this case sheep or goat’s milk, and spices. It’s a fermented alternative to pasta that is made in the summer months in the Middle East (when the days are warm and dry) and eaten throughout the winter in soup and porridge (pp. 32-3). It’s a rustic dish that takes a lot of planning and time, though not much work. She balances these slow dishes – like making your own fill pastry – with much quicker and simpler preparations. There are useful recipes for Preserved Lemons (p. 39), Pink Fermented Cabbage (pp. 40-43) that comes from Thrace and has more in common with the Balkans and Russia than the Southern Mediterranean. It’s used in many dishes including the homey Lentil Soup with Home-Pickled Cabbage (p. 119) and Rolled Pie with Fermented Cabbage, Peppers, Walnuts, and Raisins (pp. 176-177)/ Aglaia has tweaked the recipes by adding raisins and walnuts that balance the sour cabbage. She often borrows recipes from Middle Eastern Chefs, adding her own touches. She includes Laurent Gras‘ Ratatouille Nicoise (pp. 152-153) that she compares to Turkish Turlu, a stew of summer squash, eggplant, and tomatoes.

Mediterranean Vegetarian Feasts is a smart book – the kind of book to give a gardener and cook who is having trouble keeping up with Nature’s bounty – or for someone new to vegetarian cuisine. They’ll thank you effusively.