Sabrina Ghayour has some wise, straightforward advice in the introduction of Persiana: Recipes from the Middle East & beyond (Interlink 2014):

Although some recipes in this book are authentic, some draw inspiration from the Middle East and combine the wonderful flavors and ingredients of the region with everyday produce of the region with everyday produce that’s available in supermarkets everywhere. You don’t need to have a million ingredients to create something delicious and special–sometimes you just need a handful of spices, and a few helpful hints on what to do with them and how versatile they can be. (p.6)

Don’t be put off by the exotic name of her cookbook. Persiana is filled with recipes that are easy to make, and stand out because they are conceived well – not because they are difficult or demanding to make. The recipes highlight Persian cooking, but they also leap from Turkey to North Africa to Europe. It is an exuberant book that invites cooks to be just as creative. 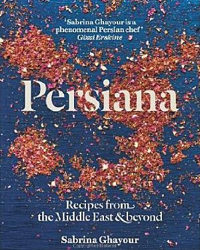 Many in the Middle East would judge a cook or a restaurant by the Mezze served. Save the first recipe for this coming spring: Fava Beans with Garlic, Dill & Eggs (p. 10) an unusual dish that Sabrina says hails from Northern Iran. It has turmeric, dill, and a whole head of garlic for six eggs. Sabrina includes plenty of recipes for yogurt dips – including Turkish Yogurt with Cucumber, Garlic & Dill Cacik (p. 15) and Persian Yogurt, Cucumber & Mint (Maast’O Khiar (p. 20) that will turn any sweet yogurt lover into a savory yogurt lover. For hot mezze, try the Turkish Feta Pastry Cigars (p. 33) with a sprinkling of Nigella seeds prettily photographed by Liz and Max Haarala Hamilton.

Some of the Mezze chapter recipes are inspired by flavors from North Africa, like Baked Eggs with Feta, Harissa, Tomato Sauce & Cilantro (p. 41) that is Sabrina’s take on the Turkish menemen or is it huevos rancheros transported to Morocco? She includes a few meat mezze recipes that would make for great lunchtime dishes like Safavid Style Beef Pastries (p. 38) puff pastry packets hold spiced beef flavored with nutmeg, cinnamon, chili, and rose petals. She also includes two different recipes for meat cakes or meat balls – Kotlet and Kefta, and one for Turkish Lahmacun (p. 45) individual lamb pizzas that make one put aside Italian pizza.

Explore Persiana all year long. Get some sumac, za’atar, saffron, harissa, and preserved lemons and have fun with the new flavors – if you haven’t tried them before. If you have, then think of this book as setting out on a meandering path through the cuisines of the Middle East and North Africa.