Is it too late in the season to think about jams and marmalades in the kitchen?

No. Not if you have Blue Chair Cooks with Jam & Marmalade by Rachel Saunders (Andrews McMeel 2014). It is, in fact, an excellent book to pull out before you plan and cook Thanksgiving dinner. It abounds with recipes in which jams and marmalades add their intense and concentrate flavor to recipes – something that would make holiday dishes stand out. “A preserve’s fruit type is sometimes less important than its texture, sweetness, acidity, or other characteristics.” (p. 7) It isn’t so much the type of fruit you use, but how you use the jam in the recipe. She breaks it down into three ways: marriages, juxtapositions, and pairings.

When flavor marry they meld seamlessly into each other, creating a new flavor that is more than the sum of its parts. Mastering the art of marrying flavor is a lifelong pursuit; creating successful flavor marriages is one of the most satisfying things you can do in the kitchen. (p. 5)

Or in life. And if the point of Thanksgiving is to bring your family and friends together to give thanks for the bounty of life, marriages with jam would seem to be a great place to start. 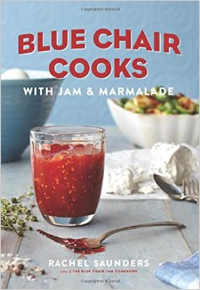 In order to make the recipes, you’ll need Rachel’s previous book, The Blue Chair Jam Cookbook or have some very good jams on hand. There are a few jam recipes in this book – but most will refer you to already prepared jams and marmalades. The book starts with breakfast recipes, so for Thanksgiving, Christmas, or another holiday, what about trying P*P Tarts (p. 47), a cheese and jam stuffed pastry version on the store bought kind. The quick puff paste dough can be made ahead or made and filled ahead of time so all you need to do is heat the oven and cook them. Of course, you could also make Belgian Waffles (p. 62) and serve with My Apple Butter (p. 60) or Maple-Quince Syrup with Rosemary (p. 68) if you have the time before you start on the turkey and stuffing.

For Thanksgiving lunch, it might be better to stick to something vegetarian. What about Beet Soup with Plums & Coriander Yogurt (p. 100) made with red or purple plum jam? Or the Jerusalem Artichoke Soup with Walnuts & Brown Butter (p. 102) that incorporates more of the My Apple Butter you made for the waffles? There is also Beet Salad with Walnuts & Kumquat Marmalade (p. 129), and the recipe for the marmalade is on p. 130 – kumquats are now in season, so it’s a perfect marmalade to make and give as a host gift, too.

As for the main meal of the day, start with Salmon Rillettes (p. 212) that you serve with a dark berry jam on crostini. Why not turn to those kumquats again and serve Brussels Sprouts with Kumquats and Smoked Salt (p. 154) which incorporates the marmalade once again. Chestnut Stuffing (p. 160) includes My Apple Butter, while My Pecan Pie (p. 172) includes Seville orange marmalade.

There are plenty of recipes for holiday drinks, desserts and main courses in Blue Chair Cooks with Jam & Marmalade along with pretty photographs by Sara Remington that enrich the book. This is a fascinating look at bringing preserved summer and fall flavor into every meal.