What does the news of the bombing of a Medecins Sans Frontieres hospital and Turkish jets intercepting Russian bombers have to do with the food world?

Time to step up and do something for the people of Syria who have been suffering for years in a most terrible civil war.

Buy a copy of Soup for Syria (Interlink 2015). All profits from the sale of the cookbook will be donated to the UN refugee agency UNHCR to help fund food relief efforts. 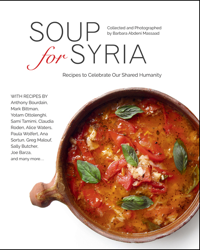 Super Chef’s copy just arrived in the mail. The recipes by chefs like, Anthony Bourdain, Claudia Roden, Paula Wolfert, and Alice Waters are impressive – as are the recipes by non-chefs like art director Pascale Hares‘s Jerusalem Artichoke Soup (p. 91) or Middle Eastern chefs who you might not know, like Claude Shahadi with Red Lentil Seafood Soup (p. 161).

Aside from the recipes, the stunning portraits of Syrian refugees by Barbara Abdeni Massad, who also collected the recipes, are moving. The faces of children, mothers, and old men bare the brunt of the destruction of their country. And yet, there are smiles and grins on the faces of the children in refugee camps. Boys play in a garbage dump, fishing for a can with a stick, another girl’s clear blue eyes smile out from under a headscarf. A girl holds her pot staring hard at the camera with inner strength. The photographs will tug at your heart, but they also speak of hope and resilience.

Claudia Roden’s Borlotti Bean and Pasta Soup (p. 40) is a rustic soup just perfect for a winter’s day. She writes: “My hope is that this project is a success and the book helps to keep the plight of Syrian refugees in people’s minds and that it will raise funds to alleviate their awful living conditions until the future is settled.” Yotam Ottolenghi and Sami Tamimi donated their recipe for Gondi (p. 71). It is a chicken dumpling soup flavored with turmeric and lime.

Soup is the ultimate comfort food: nurturing, sustaining, and all good things. One recipe is a drop in the ocean but, if awareness of the plight of Syrian refugees is raised, with each batch made and shared, then that is a force for good. As well as being a delicious meal in and of itself.

Architect Aziz Hallaj donated an excellent recipe for Aleppo Red Lentil Soup with Verjuice (p. 96) you might have enjoyed in that most beautiful city years ago. Cristina Ghafari writes of her Fish Soup (p. 158): “At a loss for some way to help, on a cold day in December 2013, I began cooking and distributing soup to poor, homeless, and displaced people of my city. I contributed this recipe to Soup for Syria because, nutritious and filling, it is one I have made often. I hope it warms your heart as it has for so many.” A child in the photo opposite grins in the sunlight.

Super Chef urges readers to buy a copy of Soup for Syria. Let each bowl of soup remind us that we can do good and help the refugees.