How do food, love, and war form a personal narrative?

Journalist and author Annia Ciezadlo claims to know: she started learning from the time of her honeymoon.

Food and war seem to fit easily together, she says:

The idiom of war is food: cannon fodder, carnage, slaughterhouse. Buildings and people are pancaked, sandwiched, sardined. Perhaps it is because the destruction reminds us of the knowledge we spend our lives avoiding — that we are all meat in the end. (p. 255)

Small wonder to read such a quote from a one-time war-junkie journalist after nearly half a decade between Baghdad and Beirut.

Nevertheless, her newly published book, Day of Honey (Free Press 2011) starts off with love. In fact, even before even telling us much about Mr. Right, she jumps to what were supposed to be sweet days of honey for the newly married couple (both journalists). Instead, they landed themselves with as many bitter days of onions, honeymooning in war-torn Baghdad:

For the next year, we tried to act like normal newlyweds. We did our laundry, went grocery shopping, and argued about what to have for dinner like any young couple, while reporting on the war. And throughout all of it, I cooked. (p. 8 )

(One has to say that, no, when writing a food memoir? “Throughout all of it, I cooked.”) 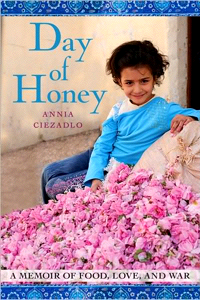 Her own childhood was far more nomadic than that of her Arab husband. Perhaps this unusually transient upbringing prepared her for life in less secure lands. As the book nears its end, she seems more willing to live on the edge than her own husband, Beirut-born though he is.

Days of Honey is quite fast-paced. One moment, Ciezadlo is adjusting to her new Lebanese family. The next she or new friends in Baghdad or Beirut are under fire. All the while, she drinks up knowledge of the region, its language, its cultures. And she eats its food — and learns to cook it. Eventually, she finds herself diving to save what’s cooking on the stove amidst sniper fire on her own apartment:

I started boiling the rest of the pasta… Fierce gunfire broke out so loud and so close that all four of us ran and huddled in the hallway by the sink… Suddenly, I remembered Mohamed’s pasta… It would get soggy. You couldn’t waste food in in a situation like this… I scuttled into the kitchen in a half-crouch… It didn’t occur to me until much later that I had been acting at all irrational. (p. 306 )

By that time, her husband is living and teaching back in New York, she still in Lebanon. At last she relents and returns back to America, soon to start this book.

In many ways, Day of Honey represents an effort to capture and validate the breadth and depth of intense life. It is very ambitious — and reads well, despite the rapid shifts in scene and interest. This book is not Le Pest: neither concentrated nor distilled. Camus, she is not. Ciezadlo is too young to have digested so much, nor does she burden her book with Weltschmerz or Existentialism. Instead, sometimes raw, often well cooked, at all times this book sizzles with Annia Ciezadlo’s candor and passion. She shares her story as she has learned to share food. One should not refuse such an invitation.

Heat a dry skillet over medium heat. Add peppercorns, cardamom, allspice, and cloves; toast until fragrant (about 2 minutes). Add cumin and coriander seeds; cook, shaking the skillet, until just toasted (about 2 minutes: trust your nose and take the spice off the heat if you smell them beginning to burn). Transfer to plate to cool. Grind to a powder with chile and rose petals. Stir in ground spices.