Claudia Roden: The Food of Spain

Claudia Roden‘s The Food of Spain (Ecoo 2011) is a serious book that examines regional foods – and yet a very personal one:

My grandmother Eugenie Alphandary spoke an old Judeo-Spanish language called Judezmo, or Ladino, which she said was Old Castilian. She was from Constantinople (now Istanbul) and was descended from Jews who had been expelled from Spain in 1492 and went on to live in Ottoman lands… They were proud of their Spanish ancestry. (p. 1)

That ancestry she calls upon as the driving force to understand and create a cookbook about the food of Spain. Of course, Spain is a land not only of Catholics and Jews, but also of Arab Moslems, who brought their own spices, cooking methods, and ingredients. 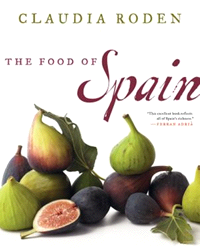 The first section of the book, Historical Influences, traces the different influences on the food of Spain from the history of Jews and Conversos to the foods that came to Spain from the New World: corn, tomatoes, turkey, sweet peppers, chocolate, and so on, and the food of artistocrats and peasants. Jason Lowe illustrates each section with beautiful photos of Spain and local ingredients.

The second section covers the four principle regions of Spain, not only the food, but also the culinary history, agriculture, architecture, and viniculture:

Another medieval Catalan cookbook, Libre del Coch, was written by Ruperto de Nola, who was head cook to Alfonso V, count of Barcelona and king of Aragon, who became king of Naples in 1443. Nola also later cooked for Alfonso’s son, King Ferdinand [I of Naples]. His sumptuous dishes symbolize the cultural apogee of the old Catalan lands. (p.105)

The reason behind all this detail is that it informs the cooking of Modern Spain and enriches our understanding of what Spain is.

The recipes are interspersed with more essays on ingredients, like cured ham (jamon) pp. 163-5) followed by a recipe for ham croquettes (croquetas de jamon). Another essay on peppers and paprika (pp. 238-9) is followed by recipes including Roasted Pepper and Onion Salad (p. 241) flavored with cumin, and Roasted Pepper and Egggplants (p. 243) simply prepared with olive oil and salt.

A section on sausages includes a marvelous photograph of a tiles depicting a chef slicing a ham with Papa Comer Bien Y Barato San Milan 4 beneath. The recipes that follow the essay and photo of a sausage maker include White Beans with Sausages and pig’s foot and ear (p. 497) and boiled meats and chickpeas with vegetables (p. 488-9) a cocido, a Spanish boiled dinner.

The Food of Spain is an immense book in scope – both of the history of cooking and food in Spain, as well as abundant recipes. Claudia Roden writes with authority and knowledge, bringing recipes to life with background stories. This is a gift for those who are interested in a more thorough understanding of Spain.

One comment on “Claudia Roden: The Food of Spain”