Read First Catch Your Hare: The Art of Cookery Made Plain & Easy by Hannah Glasse (Prospect 2012) because it captures the wonderful language and fascinating British cookery of a period before the American Colonies revolted. The facsimile of the book published in 1747 contains useful recipes like Brockely in Sallad (p 98), Another Way to Season a Collar of Beef (p. 128) and the marvelous: To Make Hedge-Hog (p. 146). There is a recipe for real Peas Porridge (p. 79) to go with the nursery rhyme.

Take a Quart of Green Peas, put them in a Quart of Water, a Bouille of dry’d Mint, and a little Salt. Let them boil till the Peas are quite tender, then put in fome beaten Pepper, a Piece of Butter as big as a Walnut, rolled in Flour; ftir it all together and let it boil a few Minutes Then add two Quarts of Milk, let it boil a quarter of an Hour, take out the Mint, and ferve it up.

Read the “f” as “s” and it sounds quite modern (if you like mushy peas). 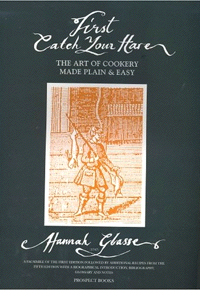 It is just as interesting reading the commentary included with this fascinating book on British cookery. There are essays and a preface as well as a glossary and notes. . They go into detail about why this is such an important book. The author of the book, originally published in 1747 by A Lady, turned out to be Hannah Glasse. There is some biographical information about her, an illegitimate daughter of a wealthy man, who ends up marrying a ne’er-do-well and Hannah wrote The Art of Cookery to raise money for her growing family.

Prior to this book, recipes were written without regard for the people who would cook them. Hannah Glasse changed all that. She wrote for the women who would be preparing the food. She lifted and copied recipes from other writers who preceded her, but she did cook, and added helpful notes, changed words and making the recipes clearer. Historian Jennifer Stead writes in an article called “Quizzing Glasse” on the notable successful women selling cookery books:

So the women do not (as the men seem to enjoy doing) include the building of castles with salad or the making of hollow turrets in battalia pies to be filled with exotica. Just as in modern haute couture, the women design what is actually wearable, whilst the men design to some abstract idea. (p. xx)

Hannah Glasse is a precursor to Julia Child, Nigella Lawson and many others. We learn that she did not include medical recipes and she stressed cleanliness in the kitchen.

First Catch Your Hare is a wonderful book to give a serious cook or student of cookery. Its detailed glossary will help you read and enjoy the recipes of a spirited woman writer.