If you need help, then reach for Sally Butcher‘s The New Middle Eastern Vegetarian: Modern Recipes from Veggiestan (Interlink 2012).

Don’t let Sally’s decidedly non-Middle Eastern name put you off. She runs London’s Persepolis, a Middle Eastern emporium. That means she admires more than one country – the recipes cover Morocco to Afghanistan, with plenty of influence from her Iranian husband. She is also a part-time vegetarian, like many people in the Middle East who use meat sparingly, as a flavor, rather than letting it dominate a meal.

Of course, there are exceptions like a great Afghan or Turkish kabob joint that celebrates meatiness, but the cuisines of the Middle East are justly famous because, in general, people tend to indulge in meat rarely, rather than the daily consumption practiced in other diets. 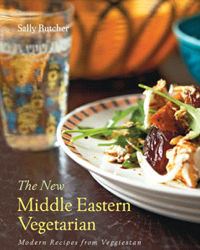 But there is much to celebrate in Middle Eastern diets:

What sets “Veggistanis,” or Middle Easterners apart is the manner of eating. The business of a quick bite in front of the TV, or the family eating in shifts as suits their respective routines, would simply not be acceptable (although the TV per se, can be a part of the evening meal, turned up so that it can be heard above the chatter). The family always eats together, and while that wonder of Roman engineering the dining table, has reached the shores of Arabistan, dinner is often spread out on a cloth on the floor in some households. (p. 8)

Like a good picnic indoors! It’s all about savoring the meal, thanking the one who prepared it, and spending time eating and drinking.

The first chapter covers breads in many lands. She starts with Naan-e-Saagak or stone-baked whole-wheat bread (p. 13). On your next weekend trip to the beech, collect some smooth stones that you’ll oil and put on a baking sheet and use to create the lovely bumpy texture of this crisp bread. Next are versatile Piroshki (p. 14) from Iran, not Russia. These are filled with a cottage cheese – green olive mixture. She also includes Peynerli Boregi, or Cheese and Wild Green Pie (p. 19-20) filled with nettle tips:

Anyway, pruning shears at the ready? You can buy nettles at the funkier farmers’ markets, but it is more satisfying to acquire them – there are enough growing wild, after all. If you are picking your own, avoid those which may have been sprayed or are situated by a busy road – you don’t want to be detoxing and retoxing at the same time. (19)

If you can’t find nettles, she suggests radish tops, beet greens, watercress and spinach. In a pinch, you could use Swiss chard, kale or other dark leafy greens.

Each chapter includes recipes from all over the Middle East, some from her suppliers, others from travels or family. Some of the dishes are in practically all the countries with slight variations, like Middle Eastern Ratatouille (p. 178) called Sarasura, Turlu, Guvec, or Briami depending on the country, it’s a mixture of eggplant, zucchini, potato, peppers, and tomatoes, flavored with oregano, onions, and garlic. A hearty, summery stew for those days the sun doesn’t shine and the weather has a bit of a bite. There is a wonderful chapter on Cooking with Fruit to explore, with Baked Stuffed Quinces (p. 203) and A Token Tangine-Prune and Turnip (p. 207).

The New Middle Eastern Vegetarian is a handsome book full of thoughtful recipes that celebrate vegetables – but could easily fit into a meal with meat. Next time you are in London, you’ll want to explore Persepolis – but till then, explore Sally’s recipes.