Is French cuisine best interpreted by chefs who are not French?

He is the chef of the recently closed Becasse in Sydney, Australia. He’s cooked with Raymond Blanc in the UK and Liam Tomlin in Sydney. But he is, above all, a French chef attuned to the changes in French food from creamy sauces to lighter fair.

French Lessons: Recipes and Techniques for a New Generation of Cooks (Hardie Grant 2013) isn’t just a beautiful cookbook with generous photography by Steve Brown. It is also a comprehensive guide to French cookery for the home cook:

The primary goal of this book is to provide an insight into the world of French cookery in a way that is accessible and feasible for home cooks of all abilities. It’s not intended to be a Larouse Gastronomique or to duplicate a professional Cordon Bleu cookery course, but rather, to bring a wide range of useful techniques within reach of even the most timid cook. (p. viii) 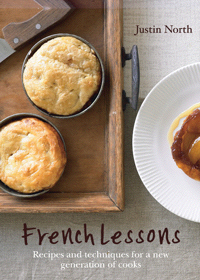 The first leçon is on Flavorings (p. 13) the smell and taste of food. He breaks things down into essays on herbs, such as the herb mixture Herbes de Provence and Fines herbes, the spices such as Sweet spice mix for cherries (p. 17) which includes red wine, port, anise and cloves. The book goes on to Salt, Alcohol and Vinegar Solutions, Sweet Flavorings, and Tea. Lessons learned in this section on flavorings are then used throughout the book – and throughout French cuisine.

French Lessons covers all of French cooking – far beyond this introduction on flavorings. He even includes a chapter on Charcuterie, to teach readers how to make a fine Pate de Compagne (pp. 122-3) followed by Roast Venison Sausages (p. 124), and Cured Duck Ham (p 125). Even though there are only three recipes – they are well chosen and will serve well as a foundation from which to explore variations. Likewise, there are three Meringues recipes – Swiss, Italian, and French (pp. 296-7), but he has a lengthy essay all about meringues, including Tips for Whisking Egg Whites:

In general, eggs are easier to separate when they are super fresh, but the whites whip better when they are older and lightly warmed. (p. 294)

Learn from Justin North, and instead of grilled or boiled lobster this July 14th, make his stunning Lobster Tail Roasted on Aromatics (p. 205) with Confit Tomatoes (p. 142), followed by one of his lovely recipes for fruit soufflé (p. 304) or Chocolate Fondante (p. 315). Learn French!