How do you approach a cookbook that is, in reality, the story of a restaurant, a chef, his love, his life?

Perhaps many or most serious cookbooks from chefs are their memoirs at a certain time – but Coi: Stories and Recipes (Phaidon 2013) takes this task very seriously.

Like Rene Redzepi’s cookbook, Noma, or Thomas Keller’s cookbook, The French Laundry Cookbook , it is filled with sunning photography by Maren Caruso, that illuminates the food, the places where the food comes from, and the story Daniel Patterson tells of his love for Northern California.

Daniel Patterson starts off Coi with the story of how he came to stay in Northern California, rather than return East, and how the restaurant Coi’s inception was the death of his mother-in-law. Far from being a sad story, it is an inspiring one. The food we make each other is tied to how we feel, how the people eating our food feel, and what impact the food will have on their spirits.

As family and friends gathered around the little kitchen I remembered, after so many years of producing fancy restaurant food, what it meant to cook for someone. It was then that I began to think about the restaurant that would become Coi. (p. 24)

The book is organized simply into five chapters, starting with California, with scenic pictures of the state, followed by The Coi Kitchen, Our Menu, A selection of Recipes, and finally Weights and Measures. Coi serves one tasting menu of eleven to thirteen dishes.

The menu should be a story and each course a chapter, one building on the next, the transitions fluid, graceful, ideas, techniques and ways of looking at the world. I want diners to leave inspired, excited, changed in some small way. (p. 52) 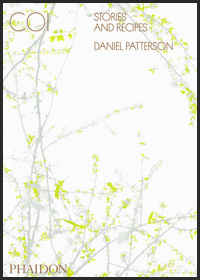 The book then presents and analyzes the tasting menu of 15 dishes from September 14, 2012. First is a standard welcoming dish of brown rice crackers deep-fried like chicharron, served with an avocado lime puree aptly named California Bowl (p. 56). Next is Tomato Olive Oil Basil (p. 58), pesto topped with chopped tomatoes and juice, topped by a clear gel sprinkled with tomato seeds, and finally a sorbet made of green olive oil, tomato water and bread. It’s a playful salad presented as a soup, and yet, with the texture of a dessert.

I think of the first dish as a way to reset diners’ expectations, and prepare them for the rest of the meal. It is always based on humble ingredients in an unexpected form, with a finely tuned balance of salt and acidity. It has to deliver something new, even to the most sophisticated guest. It is the hardest dish to create, and the one that changes the least. (p. 58)

The humble ingredients are tomatoes, bread, and olive oil. The unexpected form is the gel and the sorbet. The salt and acidity are in both gel and sorbet.

Each step of the book is thoroughly explained – so that a student of cuisine can really follow a Daniel Patterson’s thoughts without eating a single dish. And those dishes are re-creatable as long as you have access to the exquisite ingredients, both cultivated and wild, of Northern California, Xanthan, gelatin, and a host of other ingredients. The recipes themselves are essays rather than lists and steps. The actual measurements of ingredients are in the last chapter. Read the stories first, and then the recipes make sense. It makes sense, too, to separate the measurements from the recipes – the recipes are stories as well.

You can also catch Daniel Patterson on tour October 11th participating in The James Beard Foundation’s Taste America “Local Flavor from Coast to Coast,” traveling national food festival that will be in ten cities. He will be participating in the kick off dinner: