Summer is coming and for a lot of families that means hungry kids home from school. What celebrity chef can you turn to for help feeding them?

He and his wife Lisa have raised four boys and they know a thing or two about big appetites and good food. Despite his large restaurant empire, he manages to cook at home often enough to inspire his kids to think about a career in food. Charlie Palmer’s American Fare: Everyday Recipes from My Kitchen to Yours (Grand Central 2015) contains his favorite family recipes. But it is also a marker of how long he has been a leading chef in America, how long he has been able to sustain and grow his empire, and how much his cuisine is rooted in his early experiences. 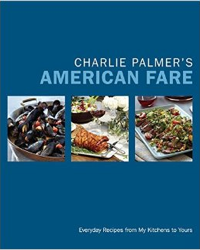 If you glance at the photos in the introduction, you will form a clear idea of what Charlie means by his Progressive American Cuisine. There is a shot of Charlie choosing fresh carrots at a farmer’s market, another of him in his kitchen instructing a cook about the qualities of a whole large fish, photos of Charlie cooking, showing off grapes on the vine, and finally a few shots of Charlie, his wife and their boys. What he cares about is sustainable, locally sourced produce, great domestic wine, teaching his staff, and his family. The photos by Robyn Lehr are a bit over exposed – but that doesn’t get in the way of underscoring what make Charlie’s empire resilient and long lasting.

In the first chapter on soups and salads, Charlie offers three coleslaws that you could whip up on a hot summer day: Almost My Mom’s Coleslaw (p. 15) contains Miracle Whip and pickle juice to get a “commercial taste.” The Spicy Citrus-Soy Slaw (p. 17) combines more interesting ingredients like jicama, soy, and rice vinegar and shichimi togarashi, while the Broccoli Slaw (p.17) contains both mayonnaise and sour cream along with bacon to encourage picky eaters to try broccoli. The next page has an even more colorful salad: A Real Chef’s Salad (p. 18), loaded with watermelon radish, cheeses, proscuitto, chicken, roast beef, vegetables, and a Russian dressing.

There are also plenty grown-up dishes like Wood-Roasted Chipotle Oysters (p. 42) and, if you have the fire going, Wood-Roasted Lemon-Red-Chile Shrimp with Cabbage Salad (pp. 45-6) with another version of slaw, this time with fennel and mustard. Once the garden tomatoes, eggplant, and peppers come in, how about a lunch of Baked Ratatouille (p. 52) with bubbly mozzarella melted on top? Too much zucchini? Prosciutto-Wrapped Zucchini (p. 69) would be a perfect lunch dish, since they are stuffed with breadcrumbs, mozzarella and wrapped with prosciutto. There are plenty of vegetable dishes to discover in Charlie’s cooking, to serve along side the grilled meats, birds, fish, and pasta. These are easy to moderately time-consuming recipes with no extra steps to slow you down. There are recipes for fancy dinners and plenty for everyday meals with family.

At the end of the book, is a chapter entitled Family Favorites and Backyard Dinners, with a picture of Charlie and son Reed fixing up Bruschetta (p. 176). This is the section to share with your kids – and encourage them to come up with recipes of their own – or just fix these. Dad’s Oatmeal Cookies (p. 200) sounds perfect for Father’s Day. Charlie’s version? Easy! It’s off the Quaker Oats box, but with added blueberries and chocolate bits.