Gordon Ramsay’s Maze (Key Porter 2009) is an interesting book on several levels. The recipes were not written by Gordon, but rather the head chef at his restaurant Maze in London.

That head chef, Jason Atherton, not only interprets Gordon’s cuisine at Maze, but he has also trained under, among others, El Bulli‘s Ferran Adria, who has supplied a Foreword to the book. It is interesting to uncover the influences of Jason’s various employers, as well as the countries in which he has worked – France, Dubai, and Asia. 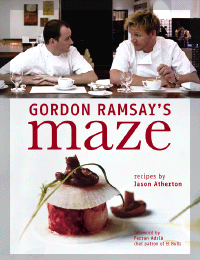 The idea behind the book is to introduce a complex, restaurant recipe highlighting one ingredient, and then to use that ingredient in slightly easier recipes that follow. The first trio of recipes starts with Cornish Crab Mayo with Avocado and Corn Sorbet (pp. 14-17) The concoction is served in a martini glass spiked with oscietra caviar. The corn sorbet is a clever take on creamed corn made from canned corn, pureed and frozen. Crab Toasties (p. 119) are, in contrast, a one-bowl recipe, a kind of bruschetta with crab salad. Crab Chowder with Corn Puree (p. 20) rethinks two of the ingredients of the main recipe into a flavorful, thick soup. The photograph by Ditte Isager, shows the soup being poured into a bowl which already holds a mound of crab and another of corn puree, which gives the otherwise brown soup some welcome color.

The marvelous chicken recipes in the center of the book are perhaps the most intriguing, if you have not eaten at Maze. Slow-Cooked Chicken with Smoked Mussel and Brown Sauce (pp. 128-129) is poached in 2 ¼ pounds of butter. The Tarragon Emulsion (p. 129) is rethinking of the mayonnaise technique in which olive oil is slowly trickled into a food processor emulsifying it. The Lemon and Garlic Roasted Chicken with Moroccan Spices (p. 131) is actually poached first in a lemon stock and then roasted with harissa and ras el hanout. The chicken legs left over from the first recipe as well as the Tarragon Emulsion are used up in Coq au Vin (p. 132) rich with red wine, brandy, and port.

Gordon Ramsay’s Maze is not a simple cookbook. Even the recipes meant to be followed by the home cook are complex. Yet, the flavors and juxtapositions of textures and colors are intense and worth examining. The recipes lead one to speculated on where and what Jason Atherton will do next.