The Food Network’s star machine, The [Next] Food Network Star keeps churning out new hosts for the Food Network – it’s a clever double duty show – since audiences like the competition and they are instant fans of the winner’s new show.

But fans need more, so the Food Network has put out Food Network Star: The Official Insider’s Guide for America’s Hottest Food Show(William Morrow 2011) written by Ian Jackman. On the cover, fans are promised, “winning recipes, behind-the-scenes stories, hundreds of photos & more”, as well as a forward by Bobby Flay. Hurrah!

As a judge of Food Network Star, I think about the network from a business standpoint. I’m looking for someone to add to the roster who is going to help make a stronger team. I put my chef coat on for the Iron Chef challenges, but what I enjoy the most is evaluating finalist on Star when I’m wearing a suit. Star kills two birds with one stone. It’s a very successful franchise in its own right, and we find talent. (p. xii)

That’s why Bobby is a Super Chef: he has business acumen – he is thinking about media property, his own stake in the network, and encouraging new talent. The show is all about teaching chefs how to be performers, entertainers, and communicators – it’s not about cooking. Buried in among the fluff for fans in this book, are nuggets about how TV has shaped American food careers, and the people who have done the shaping. Even if you aren’t a fan of chefs as performers, this book is a fascinating inside look at the star machine. 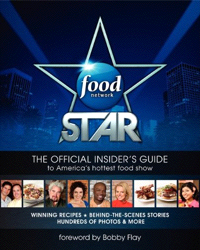 There are tons of photos of the “cheftestants” in each of the seven seasons. There are shots of Mario Batali teaching them to make pizza from season 1, along with a recipe for Rustic Pesto Pizza (p. 12) from Harmony Marceau. There are quotes about contestant Guy Fieri, and his Chipotle Pasta (p. 50). Then a follow-up interview with Guy (p. 76-79) winner of Season 2 and a major player on the Food Network.

The last chapter is on Season 7 – but at press time the winner hadn’t been chosen yet (which means that they really don’t know who the winner will be until the end). But Season 7 is now over and Jeff Mauro won (his recipe, Chicken Apple Sausage and Squash Soup is included). Jeff’s new show, Sandwich King, premiers on August 21 at 11:30am. It is a surprisingly local show:

Mauro broadens his inspired sandwich resume as he takes Food Network viewers on a delicious odyssey, preparing dishes inspired from some of his favorite local restaurants around his hometown of Chicago, such as the Peoria Packing Butcher Shop and the Isaacson & Stein Fish Market.