Christopher Hirsheimer and Melissa Hamilton‘s exquisite book series, Canal House Cooking are all about sharing home cooking and the pleasures of the table. The latest volume, No. 7, is La Dolce Vita (Andrews McMeel 2012) that is focused not on their Canal House but on a rustic farmhouse in Tuscany.

It had a spare, simple kitchen with a classic waist-high fireplace with a grill. It was all we had hoped for. It was our Casa Canale for a month. (p. 6)

The two cooks and writers had decided in the Spring to head to Italy to try to really understand Italian home cooking – so there is still time for readers to make the same plans for this summer. 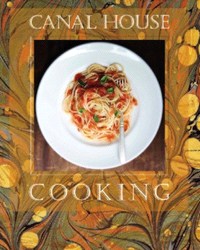 There are sandwiches inspired by trips to Florence where the two eat crustless white-bread tramezzini and sweet butter and prosciutto panini as well as panini tartufati. Their version uses Kerrigold Irish butter and white truffle paste. These are recipes about recreating the tastes of sandwiches – but the writing is key – it will transport you to Italy while you are still munching in the US.

Many of the recipes are inspired by Italy – capturing what makes a dish Italian, rather then recreating exactly a dish they ate. Mussel Soup (p. 32) is full of fennel, potatoes, and tomatoes.

This flavorful mussel soup, Italian in spirit but with New World influences, has the tomatoey richness of a good Manhattan clam chowder.

Minestrone (p. 35) follows more closely to an Italian model – or rather the thousands of variations of the soup that can be found in Italy. The soup in the photograph by Christopher really looks like the soup described in the recipe, not just something whipped up to look good – although it certainly does.

This being an Italian-inspired cookbook, there are some wonderful pasta recipes, including Spinach Pasta (p. 38) with nine step-by-step photographs that will help you understand just what to do. Once you have mastered the pasta, Tomato Sauce (p. 103), Balsamella (p. 106) and Whole Milk Ricotta (p. 102) make Green Lasagne with Tomato Sauce & Fresh Ricotta. The point is making each component yourself means that the lasagne will, in fact, taste Italian and sublime!

Read this pretty book to follow in their footsteps and get inspired to head out to make your path to a canal house.