Super Chef received a “taster” of Jamie Magazine edition for North America. The UK edition has been available in the US – but this version promises to have some local content.

Why is Jamie Oliver launching the magazine?

It follows editions in Russia, Germany, and Holland. – though the magazine claims to be sold in 45 countries. The deput Holiday issue of Jamie magazine is available as an app this week. The first print issues will hit newsstands in mid-January 2013. The magazine has 120 recipes as well as travel stories, interviews with chefs and food artisans, and pictures of Jamie himself. The app has additional content “from cooking videos to shipping lists and more.” The “taster” of some 30 pages, starts off with a big advertisement for NovaScotia.com and another for Jamie Oliver olive oil and balsamic vinegar. 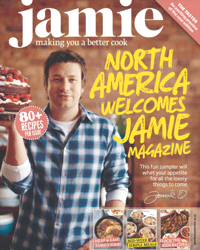 Inside is a letter from the Editor-at Large (Jamie)

What I love about Jamie Mag. Is it’s a forum for me to let you know exactly what I’m up to – what food is exciting to me, what I’m cooking at home, my favorite tips and recipes and much, much more – as well as a place to embrace and celebrate brilliant chefs, food writers, photographers and illustrators from around the world.

But he already has plenty of forums – his websites, his restaurants, his books, his 15 Foundation, his TV shows, his now former position as spokesperson for Sainbury’s, and his guest appearances as innumerable events. The idea is to communicate “Jamie” in as many ways as possible – reaching an audience in as many ways as that audience receives food advice and help. It’s what drives Martha Stewart, Paula Deen, Rachael Ray, and any other celebrity chefs and hosts to launch magazines. Cut your hair once a month? Go to the doctor’s or dentist at least once every six months? Wait for your car to be washed? Then you are going to have time and opportunity to read the Jamie Mag.

The magazine does deliver. There’s plenty from Jamie like “A Better Burger” (not signed) with a box by Ben Denner of Lucky Chip, London (why shouldn’t a British chef teach Americans how to make American food?). There is a travel article on Nova Scotia, and even a section called “Teach the Kids” with an article called “Mexican Fave” on Chicken Fajitas with Cherry Tomato Salsa (p. 31) Two cute little girls (where’s the boy helping?) cook in step-by-step photographs. This hits all the areas that Jamie brand covers – children, comfort food, and easy, quick dining. It underscores his brand.