Remember the character of the Greek father in My Big Fat Greek Wedding?

He argued that every word is, in fact, Greek in origin:

That’s the way Greeks and Turks (and probably other Middle Easterners and Asians) feel about yogurt. In the introduction to The Yogurt Cookbook (Interlink 2013) Arto Der Haroutunian jumps right on the side of the Armenians with his own etymology of the word “yogurt.” (Many would argue strongly that it is Turkish in origin.) 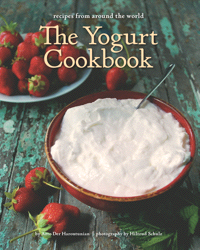 Whether or not he’s right – he has written a marvelous volume all about yogurt.

Finally, the best of all, when Noah’s Ark was floating over the waves and the animals produced all that milk poor old Noah had nowhere to store it and so he used sewn up bags made of animal stomach and, to his great surprise, one day he found that the milk had thickened.

At first he thought “what a waste,” but when he tried it he liked the flavor and thus yogurt was born. (p. 7)

Arto goes on to say not only how to make yogurt (without the stomach) but also how to make labna, dahi, urgo, panir, madzna banir, chortan, and surki (pp. 18-21). His aim is to examine yogurt in dishes around the world. Yogurt makes us feel good, keeps us healthy, and adds flavor to dishes from appetizers to desserts and drinks.

In the chapter on Poultry, he spans the Middle East from an Iranian dish called Dami Ghalebi Ba Morgh (p. 194) rich with dried fruit, nuts, and saffron to an Armenian dish called Nourov Jud (p. 196) or Chicken with Pomegranates, to Souriyani Chicken (p. 198) from an Assyrian in Baghdad. But yogurt is used in poultry dishes in other areas as well: there are several Indian Murgh dishes – Murgh Tiffa (p. 199) and Tandoori Murgh (p. 200) and Murghi Dahi (p. 208) as well as Paprikas Csirke (p. 205) from Hungary. There are helpful headnotes that include information on what to serve with each dish. Photographs by Hiltrud Schulz make even similar dishes (chicken with yogurt in various forms) stand out.

Is yogurt the perfect food? Perhaps, since it highlights the flavor of other foods – mellows the garlic in Tzajiki (p. 65), cools the throat in Mango Raeta (p. 94), and intensifies the chocolate in Istanbul Chocolate Cake (p. 290). Arto wrote The Yogurt Cookbook for yogurt lovers and future yogurt lovers.