Best be prepared with a handful of vanilla beans as you embark on Tom Douglas’ The Dahlia Bakery Cookbook (William Morrow 2012) experience, at least for the promising concoctions that drew my attention. And be prepared to devote some time to building memorable desserts from the ground up.

The Dahlia Triple Coconut Cream Pie (p. 161) won accolades from my coconut devotees, as well as from lukewarm coconut fans. Most telling, the little ones, who grimaced at the mention of coconut, competed with the rest of my clan to dig into the pie pan. Building the lovely concoction was truly an act of love, since every part of the pie was made using basic ingredients – there were no short cuts. 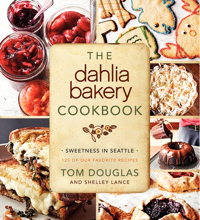 Each layer incorporated coconut, which seemed overwhelming when I studied the recipe, but I was glad that I didn’t back off from adding it when indicated. In fact, I added coconut cream to the whipped cream topping (not a part of the recipe), so actually, the result was 4 layers of coconut.

The piecrust incorporated shredded coconut, pulsed in the food processor with the flour, butter, sugar, and salt. The pastry cream gained its heavenly flavor from coconut milk, shredded coconut, and vanilla beans. As I mentioned, I added coconut milk to the whipped cream topping. And then there was the toasted coconut garnish. I didn’t add the white chocolate curls because I wanted to retain the purity of the coconut taste. The result was simply the most awesome coconut cream pie that any of us had ever tasted or imagined.

The Arborio Rice Pudding with Cinnamon and Vanilla (p. 312) gained its silky smooth richness from the crème anglaise, made from vanilla bean, cream, milk, and eggs. The Arborio rice was cooked in whole milk and cinnamon. When the rice and the crème anglaise were conbined, whipped heavy cream was further added to the mixture. I made this glorious pudding on a chilly dreary morning, and its warmth, rich creaminess, and lingering sweetness brought joy to the day.

The Dahlia Bakery Cookbook renewed my interest in creating truly great sweets. It won a permanent place on my bookshelf.