How do you incorporate the essence of the Eastern Mediterranean diet into an American ethos while adding flexibility?

Turn to an Australian interpretation of Greek cuisine. Pam Talimanidis’ A La Grecque: Our Greek Table (Hardie Grant 2013) is a stunningly beautiful cookbook and photography essay on Mediterranean food. She and her Greek husband own a restaurant of the same name in southwest coast of Victoria in Australia. It is in a holiday area so they are busy seasonally and can spend the off-season (June and July) in her husband’s village in northern Greece. Pam writes about her life in a Greek village, with essays on each of her family members, starting with her mother-in-law, the formidable Yaiyai, who was born in Turkey and became a refugee in northeastern Greece in the brutal population exchange between Turkey and Greece.

At first Yiayia would inspect everything I did, and more often than not I was chided and corrected, so that tasks were completely strictly in line with recognized standards of village protocol. I did find that rather hard to take and many time I complained bitterly to Kosta about Yiayia’s bossiness and criticism. But I grew to love her dearly and came to respect the traditions which she upheld. (p. 23) 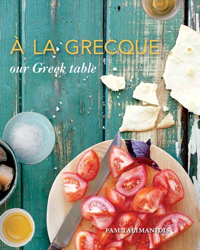 A chapter of soup follows, with a recipe for Greek Fish Soup Psarosoupa (p. 28) that is a basic vegetable soup with a snapper head added for the last twenty minutes of cooking time. Lentil Soup Fakes (p. 30) includes French Puy Lentils and both olive oil for thickening and wine vinegar for sharpness. Pam also includes non-Greek soups like Smoked Cod, Salmon and Potato Soup (p. 31) thick milk and fish stock based soup from Scotland.

The next chapter starts with Pam’s wedding to her Greek husband Kosta, which only took place after “Kosta pressed a considerable sum of money into the bishop’s palm that everything fell into place and the wedding was able to precede.” She describes the wedding in Thessaloniki to which the whole village is invited. The mezze chapter that follows included a traditional vegetarian version of Dolmades (p. 54) and an interesting meat version, Dolmades with Minced Pork Sarmathakia (p. 55) and the lunch dish, Long Yellow Peppers Stuffed with Feta (p. 56) that is topped with olive oil and tomatoes and oven-baked. The book includes luscious photographs by Mark Roper of the dishes, raw ingredients, village life and the ocean.

The book ends with a chapter on Afternoon Tea – somehow both Greek and Australian. Try the Lemon Yogurt Cake (p. 229) or the Warm Pear Cake (p. 232) shown with a caramel sauce drizzled on top. There are recipes for Greek cookies like Koulourakia (p. 238) but also more Italian (or Australian?) Walnut biscotti (p. 242).

A La Grecque, the name of Pam’s restaurant in Aireys Inlet and the title of this book, evokes hospitality of village life in Greece. Her recipes will make you consider each dish just as her mother-in-law taught her. And that is the road to a healthy, delicious Mediterranean diet.