You may already have one of Daniel Boulud’s cookbooks on your shelf – there are plenty to choose from – but consider adding Daniel: My French Cuisine (Grand Central 2013) from Daniel Boulud and Sylvie Bigar with Essays by Bill Buford and Photos by Thomas Schauer. It is a grand book of plats from his restaurant, traditional French classics with Bill Buford, and recipes from Daniel, the home cook. Here is the whole chef, as much as he can be distilled into one book. He stands with his hands on his hips, smiling at the revolving door of his restaurant, a satisfied man. It is an invitation to understand why, and to share in that satisfaction.

Spend time with the magnificent recipes in the first section – from Black Truffle Oeuf en Cocotte (pp. 92-93) to Dover Sole Ballotine a la Polonaise (pp. 104-107) and Chocolate Praline Palet D’Or (pp.248-251) – all superbly photographed in their plated splendor. You might learn techniques or be able to reproduce parts of the recipes, but they are to be admired and considered in terms of Daniel’s thinking, rather than used by a home cook. 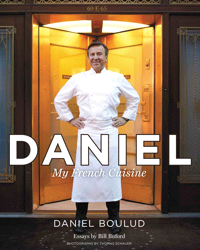 It is probably easiest to start with the last section, Daniel at Home, where he presents recipes from four regions of France:

Then on to Lyon, my hometown, where I imagine a real Bouchon Lyonnais, poireaux vinaigrette but dressed, garden-to-table-style, with a carrot emulsion, the emblematic recipe of poulet au vinaigre et a l’estragon, the first dish I made as an apprentice. And for dessert, a serious chocolate cake, the symbol of the gourmande city of Lyon. (p. 333)

The iconic menu from Alsace includes Beer-Marinated Pork Rack with a Barley-Mustard Crust (p. 338) that is marinated in beer for 48-hours with salt, brown sugar, mustard, garlic and herbs, that Daniel claims is the secret to this rustic dish. From Normandy comes Mussel and Cauliflower Veloute (p. 344), an excellent way to use up the huge heads of cauliflower in the market right in a saffron scented soup. Daniel’s promised Poulet a L’Estragon (p. 363) includes tarragon in both the chicken and the accompanying Rice Pilaf. It is a dish you could make any time of year, both for a family dinner and for guests.

Daniel is full of good taste – a chef who remains at his restaurant, and yet embraces world cuisine – he is a New Yorker and yet at his core, a French chef. Master his home cooking and you would have a treasury of recipes enough for any dinner party. But this is a book that underlines why it is his restaurants are so popular. Flip through these pages and make a reservation.