They eat in restaurants to find out what other chefs are making. They eat in their own restaurants while they cook and after the last guest leaves, and before the first guest arrives.

But they don’t always eat the same dishes that guest eat. They eat family meals made for the restaurant’s workers. 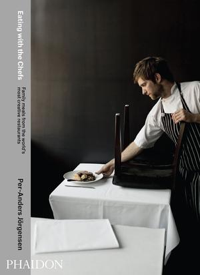 Photographer Per-Anders Jörgensen investigates family meals in Eating with Chefs: Family meals from the world’s most creative restaurants (Phaidon 2014). The idea is to capture chefs at work, enjoying meals wherever they are – at the stove, in a car, or in the garden. These are both black and white photos and color photos that capturing food, cooking, and eating in the restaurants.

But it is also about what the staff meals mean – how the draw the kitchen crews together, teach each member about the value of the others, and display cooking skills that might be unknown.

Pride is a powerful thing and it seems that when they cook for each other that sense of pride swells in a way that is very similar to parents coaching their children, or friendly rivalry between brothers and sisters. This positive energy in the kitchen ripples out to anyone sitting in the dining room. You can literally taste it. (p. 17)

If you are lucky, then the staff meal is your meal, whether you work in the restaurant or not – obviously, that is one of the perks of writing this book.

The restaurants profiled are among the world’s most exclusive, from Blue Hill at Stone Barns to The French Laundry to wd-50, but perhaps it is more interesting to look outside the US at a French restaurant like Anne-Sophie Pic‘s Maison Pic:

There is a hidden elevator that connects the restaurant to the wine cellar and here the sommeliers have set up a small “dining room,” where they eat and taste wine. It’s almost like a speakeasy from the 1930s, a secret club where they go to enhance their craft and socialize. (p. 157)

He’s captured the speakeasy feel in a black and white photograph of three sommeliers with slicked back hair, one examining a bottle, the next on the phone, and a third eating. What is for staff meal? Chicken Liver Salad, Roast Chicken with Apple and Onion Confit and Pommes Mousseline, and finally Chocolate Mousse.

Fergus Henderson‘s St. John in London has a scheduled staff meal at 11am and 5pm where the staff eat the same head-to-tail cuisine as the guests: