Chris Fischer’s The Beetlebung Farm Cookbook: A Year of Cooking on Martha’s Vineyard (Little, Brown 2015) written with Catherine Young maybe the best representative of a book by a farming chef (or cooking farmer) yet. His is a sincere, passionate voice calling for seasonal cooking, fresh-from-the-farm ingredients, delivered in a personal narrative that makes for a good read.

Two important bits of information from the introduction inform the reader who Chris is and why he cooks so well:

I found it surprisingly easy to leave the field and have a meal prepared by sundown, because the ingredients here are so fine they are best almost left alone. I realized then what I had always instinctively know, that the food we grow, the fish we catch, the animals we hunt, and those we raise on grasses and flowers salted by the sea breeze are special because of this place. (p/ xiv)

He makes the strong point of encouraging readers to use the book as inspiration and not feel bound to replicate his recipes. That makes sense, unless you are on Martha’s Vineyard, how could you find just the same ingredients he is using? Luckily, this is a well-written book thanks to Catherine Young, and it will inspire you to look for the best ingredients and cook simply.

Super Chef took a closer look at the first section of The Beetlebung Farm Cookbook, called “Secret Summer.” It starts with a description of his grandfather, Poppy’s career on the farm. He was such a devoted farmer that he spoke to his plants, including some asparagus:

I helped Poppy plant a new row alongside his established crop the year before he died. I dug straight enough to satisfy him, using a long string tied to rebar on each end, pulling taunt to keep it true…He’d spoken up, he said, so they’d get to work. The plants answered. The next spring we harvested especially stout and delicious asparagus. (p. 5) 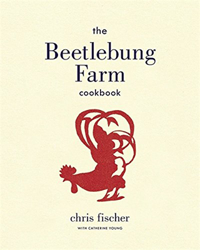 Those asparagus have to wait until a later chapter to be turned into Leek and Asparagus Soup (p. 208) and Asparagus on Toast (p. 210) in which the young, thin, buttered asparagus are topped with a gribiche of eggs and pickled carrot on toast. It makes for a pretty photograph by Gabriela Herman.

As for the Secret Summer, it starts with Sausage in Grape Leaves with Oysters on the Half Shell (pp. 6-7) with homemade Berkshire pork sausage. Imagine the sharp flavor of vine leaves – and it is alright with Chris if you use preserved leaves – combined with the moist, flavorful pork. That’s followed by Grilled Squid (p. 8) cooked in 20 seconds, drizzled with Romesco Sauce (p. 10). Grilled Sea Bass follow, served with olive oil, salt, and lemon. It is hardly a recipe – but that is the point. Sea bass is perfect served simply. There is a lovely description on how he was taught to make a salad by Serena Modigliani, tossing the greens from Beetlebung Farm one thousand times – almost. For dessert, there is a recipe for a free form, rustic Peach Tart (pp. 15-16) and that’s the meal. It’s simple, and it focuses on the ingredients without a lot of fuss. And, it can be replicated practically anywhere that’s near a good fish market and fresh peaches.

Inside the cover of The Beetlebung Farm Cookbook is a map of Martha’s Vineyard showing the rings of alluvial, diluvial, and plastic clay that make up the soil. It’s that combination that underlies the richness of the island’s food. Chris explores a year of living, working, farming, cooking and eating on the island. It is a handsome cookbook full of the richness of New England life.