Would you hire a lawyer to defend you who holds an online law degree from NBC‘s Law & Order University?

Would you like your closest deceased relative examined by a forensic expert with an online degree from CBS‘s CSI College?

Do you want your news delivered by an online graduate of TimeWarner‘s CNN University?

Apparently, BravoTV thinks so — or, at least, you wouldn’t mind having your next meal cooked by a graduate of their online Top Chef University. 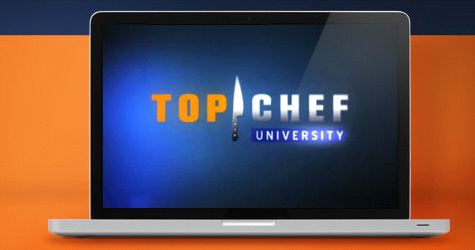 Launching this week, Top Chef University claims to be a real online culinary academy — that is, at least where fans of Top Chef can learn all they need to know to become experts themselves.

“T.C.U.” is the brainchild of its culinary director Anthony Hoy Fong, Top Chef sidekick judge Gail Simmons, and Jeff Goldenberg of Post Oak Productions. Fong and Simmons have worked up the “innovative and comprehensive
curriculum,” while Goldenberg developed the website.

The students they target?

“From experienced foodies to the home cook,” they say.

Here’s what TCU offers, according to its press release:

Top Chef University offers over 200 in-depth lessons across 12 courses in an unmatched curriculum that encompasses everything from “Kitchen Basics and Technique” to “Entertaining, Molecular and Advanced Culinary Skills.” With over 60 hours of material, insatiable fans will finally have a destination that will fulfill their culinary aspirations. Users can purchase one course per month for $24.95 and for a total of $199.95, students can gain immediate access to the entire curriculum for a year.

So, you could study for a fraction of what a culinary school would cost.

Why not learn cooking online?

Would you be ready to step into a restaurant, armed with your Top Chef University certificate?

Would you be ready to compete on the show, for that matter?

Tom Colicchio never went to culinary school: he’s self-taught. He read Jacques Pepin‘s textbooks, apprenticed himself, and learned all he could from his mentors. Then went out on his own. (See Super Chef, pp. 175-205.)

Of course, TCU makes no mention of Tom Colicchio as a role model. There is no endorsement from him, either. “Hell, yes: I’m all fired up and ready to hire the first person to graduate from TCU!”

The TCU website does not mention apprenticeships, mentoring, or even long hours of study. There is no mention of a bricks-and-mortar school backing up this so-called “university.”

There is, however, mention of former contestants of the various seasons of Top Chef becoming instructors for the university — stars yet again of the small screen.

It’s as if the Wii culinary game Cooked or Be Cooked put the spark of even bigger things into someone’s marketing head.

Where was the sensible person at BravoTV to just say “No!”?

Or does someone at BravoTV want people to switch off their TV screens and turn on their computer screens instead?