How do we learn about ourselves?

By listening to the foreigners among us. We read the great travel and social commentators like de Tocqueville, Alistair Cook,, and more recently Anatol Lieven.

What does British Jamie Oliver have to say about America?

I went looking for “quintessential American food,” my conclusion is that there is no such thing; instead there is a huge wealth of seriously exciting dishes.

Jamie’s America: Easy Twists on Great American Classics, and More (Hyperion 2010) is his explorations in five areas: New York, Louisiana, Arizona, Los Angeles, Georgia, and the Wild West. It is a fan’s book, like flipping through National Geographic – with plenty pictures of Jamie by David Loftus, as well as portraits of Americans and America. It is also a book written for Europeans, so reading it is a bit like finding out what “they” think about “us”.

This is a cookbook of recipes Jamie finds and refines – he “freshened up” and removed sugar and salt – which is a good thing considering American waste lines. The food he discovers is primarily home cooking, informed by the politics and economics of the times:

Maybe it was the recession, maybe it was Obama-fever, but everyone I met on my travels seemed to be in an open and humble frame of mind: it felt like America laid open. Times were really tough for most of the people I met.

Which makes one wonder what we will make of this book in a few years’ time, when our frame of mind has changed. 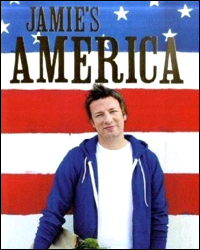 The lightest food is in the chapter on Los Angeles, in which Jamie explores salads, both from Mexican-Americans in Boyle Heights, and from artisan cooks, like Alice Waters.

Whether I was making beautiful Mexican tortillas for breakfast or a gorgeous salad full of fresh stuff from a posh farmers’ market, this Californian style of plating happens when the food does all the talking, so it looks a little scruffy but still beautiful; like it’s fallen on the plate that way. What’s cool about it is that this style fits really well with the way I like to cook: lots of citrus and plenty of fresh herbs. (p. 183)

The Beautiful Breakfast Tortillas (p. 184) are filled with herbed scrambled eggs and topped with avocado, tomato, cheese, and hot sauce. Jamie includes a recipe for homemade Hot Chile Sauce (p. 24) and Chile Vinegar (p. 240). Jamie is fascinated by the gang culture and how Rigo, a chef he meets has been able to escape it. He includes Redondo Mackerel Wraps (p. 193) and Seven Seas Soup (p. 194) and Mexican Street Salad (p. 196) in his exploration of Mexican-American food. These are colorful, bold dishes with plenty of herbs and avocado.

Jamie spent time with Mexican-Americans, but he also ate at more “posh” restaurants like AOC, and came up with La Brea Salad (p. 188), a baby beet and carrot salad with a spicy dressing and the typically Californian Tuna Tartar (p. 208) with blood oranges.

Jamie Oliver’s trip across America didn’t only produce this cookbook. Beyond his TV show, he is about to launch a line of kitchenware and dining products for the US market. Hermes-OTTO International is introducing new products this spring under license according to HomeWorld Magazine.

Serves 4 as an appetizer

Pour a few good lugs of olive oil into a small saucepan over medium heat. Gently fry the garlic slices until they are lightly golden crisps, don’t let them burn. Remove them to some paper towels to drain. Pick 8 cilantro leaves and put them to one side in a little cup of cold water.

This is best served right away while the flavors are all super fresh, so when you’re ready to eat, put half your bunch of cilantro , half your scallions, and half your chile into a liquidizer and blitz with the juice of 1 lime and about the same amount of olive oil. Season and balance so it’s got attitude and a little kick. If it needs to be loosened, add a tiny splash of water. Finely chop the remaining half of your cilantro, scallion, and chile on a board with the tuna until the mixture is as chunky or fine as you like.

At this point you’re ready to go, so lay 2 or 3 of your orange slices in the middle of each of 4 little plates and spoon your blitzed green sauce around them. Toss the tuna mixture in a bowl with the juice of a second lime and the same amount of olive oil. Have a taste, season it really well, then spoon your tuna tartare over your orange slices. Top with a few tomato quarters and a dollop of sour cream, then sprinkle over some of your garlic chips and your pretty cilantro leaves. Serve right away with wedges from your third lime. If you want to add some more sliced chile or a pinch of paprika, rock on!