Maybe a chef who resembles Santa Claus is in a perfect position to recommend what Santa might like to nibble on as he unloads his bag of goodies under your tree. Michel Richard, the jolly, energetic chef owner of Citronelle is in fine form in Sweet Magic: Easy Recipes for Delectable Desserts, with Peter Kaminsky (Ecco 2010). This is the book to get for an aspiring pastry chef, because it is about the chef’s career, not just a bunch of recipes.

Aside from his tempting recipes, there is important insight in the first chapter, The Making of a Chef, about Michel’s story of how he became obsessed with sweets and became a chef. Like Jacques Pepin‘s memoir, The Apprentice: My Life in the Kitchen, in The Making of a Chef Michel writes about his career from bronze foundry worker to pastry apprentice for famed French chef Gaston Lenotre. He was sent to open Lenotre’s short-lived New York store (where even Super Chef tasted a most exquisite birthday cake).

People are as likely to make desserts as they are to buy them. This was bad for Mr. Lenotre’s venture, but I think it may be a good thing for those of you making the recipes in this book: Americans, with all their pies and cookies and layer cakes, are by and large better dessert makers than your average French home baker. (p. xxi)

He writes about Where Do Recipes Come From? and the nature of dessert and ingredients. 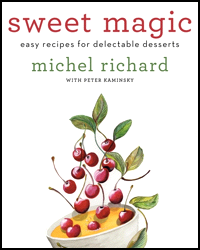 The recipes are divided up in three sections. The first is My Sweet Dreams is full of inventive desserts like the first recipe– The Ultimate French Toast (pp. 23-5) that is a dessert inspire by a breakfast standard. It is a flan sandwiched between two slices of bread that is batter dipped and fried. The idea is that the custard used to soak the bread is transformed into a separate flan increasing the number of textures and layers in the dessert.

For Thanksgiving dessert, instead of traditional pumpkin pie, try Mulled Cider and Rum Risotto (pp. 41-2). The risotto is made flavored with cinnamon, cardamom and vanilla and topped with a rum flavored cream. To make it really special, he gives a recipe for Hot Buttered Rum Sauce to be served with Ice Cream and Cinnamon Crème Anglaise (p. 163).

The following chapters on Michel’s take on French and American desserts are full of recipe notes that trace his thinking and inspiration. Some of the recipes are traditional, like Galette des Rois (pp. 123-5), but others show off Michel’s playful mind like Quick Pecan Pie with Sorghum Molasses and Cranberry Curry Cream. The piecrust is made with pecans, while cranberry juice is added to the filling.

Sweet Magic has no photographs, but it is well illustrated by Michel himself. It is a wonderful book for a young pastry whiz thinking about making a career in food, or for anyone who wants to find unusual recipes the shake up the standards.

Whisk the brown sugar in a heavy, small saucepan over medium heat until melted and smooth. Pour in the rum and cream and simmer, stirring until the sauce is smooth, thickened, and reduced to about ¾ cup, about 30 minutes. Whisk in the butter and melted. This sauce can be prepared ahead and kept for several hours at room temperature or refrigerated overnight. Reheat before serving.

Use this with Mulled Cider and Rum Risotto and Floating Islands and Melted Chocolate Morsels [page 37]. Or simply eat with a spoon.