You weren’t in San Francisco or Los Angeles in the 1970s?

You didn’t eat at Spago or Michael’s or the City Café?

You missed something big: the California Food Revolution.

The repercussions of that revolution are still fueling the development of American cuisine. Joyce Goldstein with Dore Brown tells the story in Inside the California Food Revolution: Thirty Years That Changed Our Culinary Consciousness (University of California Press 2013). As a chef and writer, Joyce brings an insider’s eye to chronicling the shift to local, foraged, farm-to-table, and fusion cooking. If you want to fill in what you missed and where Californian cuisine is heading next, read about it. 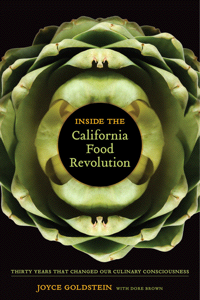 Super Chef focused on chapter 4, Women Chefs and Innovation: The New Collaborative Kitchen, which was also covered in Super Chef in a chapter on Chefs Mary Sue Milliken and Susan Feniger.

From 1986 to 1995 I wrote a regular column for The San Francisco Chronicle under the heading “California Cuisine.” I covered timely food topics and behind-the-scenes restaurant stories, pre-Anthony Bourdain, minus the expletives (p. 89)

That leaves us with reasoned and thoughtful insight into what made San Francisco, rather than Los Angeles, the hotbed of female chefs.

In Los Angeles, there was a boys’ club led by European chefs, which spurred Elka Gilmore to leave the city and move to San Francisco to open Elka in 1992. As in New York, the few women chefs in LA succeeded mainly because they owned their restaurants.

There are sections devoted to those women chefs like Judy Rogers of Zuni Café. Joyce concludes that the result of the concentration of women chefs was a change to collaborative cooking. Joyce ends by quoting Thomas Keller:

California Food Revolution includes menus from California’s famous restaurants that illuminate the changes taking place both in the front of the house and in the kitchens. It is a fascinating book that finishes with an Afterword: The Continuing Evolution of California Cuisine. Buy the book and peer into the future according to Joyce Goldstein.