Every Wolfgang Puck book is worth considering. He is not only a masterful chef, celebrity, and owner of a business empire, he is an early pioneering chef who works hard at communicating to his every growing audience. So, what should we make of his latest, Wolfgang Puck Makes It Easy (Grand Central 2014)? It is a thick, expensively produced book of “Light, Delicious Recipes and Easy Exercises for a Better Life.” It fits in with his mantra of Live, Love, Eat. It shows off Wolfgang’s still flexible body doing all sorts of strength and flexibility exercises, his second younger family, and reminds us that food and exercise, even for chefs, are both important. 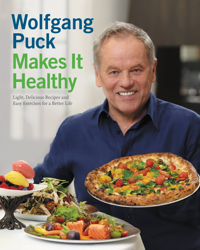 But what it doesn’t do is make the food appetizing. The photography in the book by Carin Krasner is over-bright, garish, and generally unappetizing. Page after page of decent recipes are illustrated with what looks like cheap, supermarket cookbook-style photographs.

Is it because this is a book for his HSN fans? In which case, where are his pots and pans and other Wolfgang Puck-signature gadgets? And why shouldn’t an HSN cookbook include decent food styling and food photography?

Is it because someone new is in charge of his books?

Is this part of the cycle of commoditizing celebrity chefs?

Is this part of reaching for an even broader audience?

Let’s hope for a better looking book the next time around.